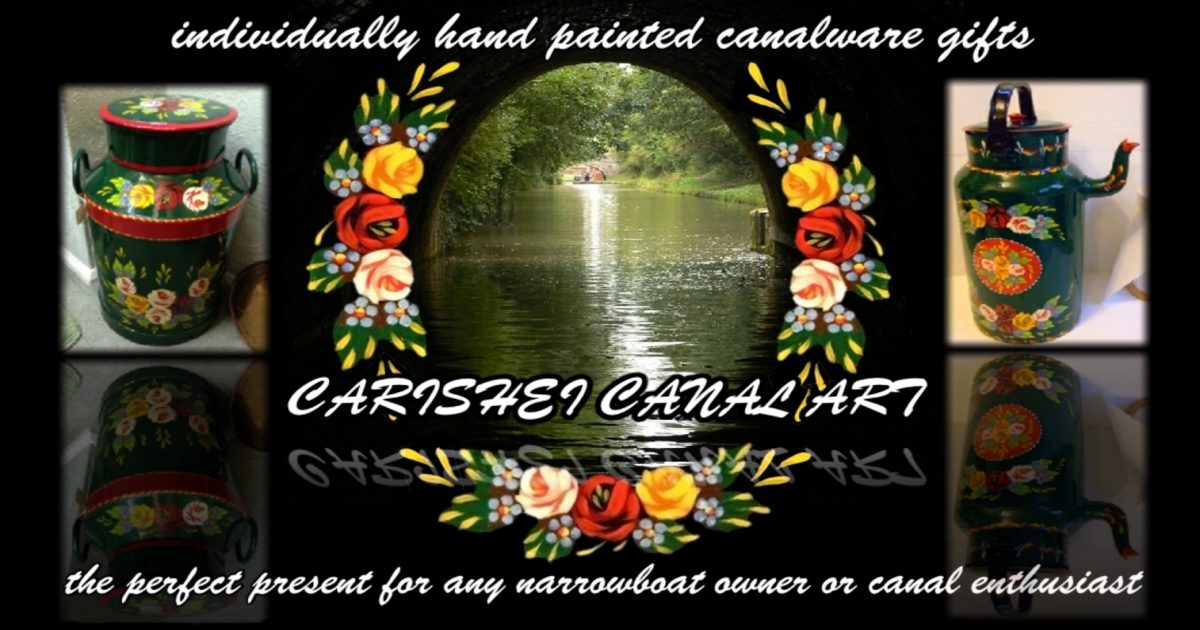 The interesting story of this particular ‘folk art’ or ‘canal boat art’can be found below here. Meanwhile this link goes straight to the Carishei Storefront on Etsy, our canalware shop. All sales history and feedback can be seen there too.

The story of ‘Carishei’ the business can be seen on the page About Us.

“no particular style can be seen as typical and the beauty is in the eye of the beholder.”

Canal art is more often known as “Roses & Castles” or “Canalware,” sometimes “Bargeware.” And like most folk art has no real known source of inspiration. The styles vary widely from fine and delicate to bold and sweeping.

Strictly speaking it’s not art at all, it would be more accurately described as a craft that has an art to it. I choose to leave this argument open as entirely a matter of opinion balanced with traditions, heritage and the undoubted skill of some very talented artists in this country. Very generally and loosely here, ‘art’ comes freely from the soul, whereas canal art follows a few basic rules defining it as a ‘craft.’

It’s interesting to note that this “roses and castles” folk art was coming into being at the same time historically as was the better known “Arts and Crafts” movement.

No particular style can be seen as typical and the beauty is in the eye of the beholder. The more complex or precise the design, the more it moves away from the idea. “Less is more” with canal art because the aim was to add splashes of colour to everyday items, and even the boats as quickly as possible!

Time was always short. Skill with speed through practice gained this art-form the charm so admired to this day.

“canal art dates back to a time long before the modern days of holidays afloat.”

Our canals and the whole network of inland waterways are a much loved national asset. Enjoyed all year round by boaters and anglers alike. Used for leisure and pleasure by thousands of people, including tourists for holidays.

After hiring a canal boat from one of the many boat hire companies, some are so enchanted they buy a narrowboat. They might even have one built for frequent use or even to live-aboard. Continually cruising the canal network or on a mooring. But canal art dates back to a time long before the modern days of holidays afloat.

Canals and the Industrial Revolution…

“demand for coal was heavily outstripping supply! There had to be a better way?”

So where, when and perhaps more interestingly WHY? For us in modern times it’s difficult to imagine when apart from wind and watermills all power was measured by the number of horses. ‘Horsepower,’ is a unit of measurement carried forward to this day in the hundreds or thousands. But back then it was literal and from which the modern measurement is loosely based.

Forgetting the modern for a moment. Early 18th century England was mostly woodland and being cut back back considerably. Not only for farmland, but our ancestors also lived in wooden settlements. These required yet more wood for heating and cooking.

As woodlands were cut back the trees were getting further away and harder to gather and bring home.

“the roads were cart tracks.”

Coal found sparsely on the surface was now discovered to be in huge quantities underground. As was limestone too. Limestone, after being burnt by coal, the resulting lime was in great demand for fertilizer. However, the roads were cart tracks and in very bad condition even for the horses. Their progress was slow and the cart loads limited to perhaps half a ton. Transport of these essentials was very expensive and time consuming.

Much of the population was increasingly busy spinning and weaving wool and cotton. Textile cities like Manchester were growing at a very fast pace.

The low pressure (atmospheric) steam engine had been invented by Thomas Newcomen in 1712 and later greatly improved by James Watt in 1776. Much more efficient these Watt engines were essential for powering these textile mills, they also needed yet more coal! Demand was heavily outstripping supply! There had to be a better way?

“in these early days the boatmen were home by tea-time.”

1759 and enter the Duke of Bridgewater. A wealthy mine owner having to pump out millions of gallons of water from his mines. This water then simply ran away to the river. Having seen canals on the Continent he contracted engineer James Brindley to construct the first ever ‘modern’ canal in England. Still called the ‘Bridgewater Canal’ to this day. The Romans had cut some short stretches of canal centuries earlier but, Brindley’s was a significant advance in technology.

It opened on July 17th 1761. So now with his coal floating in barges our horse can pull twenty tons or more. From the coal mine straight to the point of demand at a fraction of the cost. Within a year of the canal opening the cost of coal halved. And the Duke was even more wealthy! Thus we also see the kick-starting of the “industrial revolution.”

“the boatmen were home by tea-time.”

This first stretch of the ‘Bridgewater Canal‘ was about seven miles long. In these early days the boatmen were home by tea-time. As the network of canals grew at a fast rate and the distances cargo moved became longer. Cabins were fitted to the rear of the boats to house the boatmen overnight.

All was fine for the next ninety years or so until Richard Trevithick invented the true workable high pressure steam engine around 1801. Some barges used such engines in place of the horse but, later this was inevitably followed by the railways! In the mid 1800’s canal carrying companies found it very difficult to compete and profits dropped rapidly.

“the rise of an entire culture of working boat families or bargees.”

To save money during the 1830’s the boatmen employed, or more precisely deployed their entire families to work the boats. As a result the back cabins became a permanent home! This in turn led to the rise of a culture of working boat families or “Bargees.”

These families are much romanticised with many a nostalgic person seeking to emulate their lifestyle in our modern times. I guess I’m one too in my romantic dreams but, it must have been a very tough life. Extremely hard work also with long hours which would probably not be allowed now?

A Point of Pride…

“with the skills passed down the generations a water can or barrel was transformed into a work of art.”

As a result and with with the working boats now their family homes it is only natural they wanted to make them prettier. Especially being looked down upon within a now generally upward society. Also with so much of their live’s being spent in and around industrial Britain’s smoke and misery.

Any brief moment they had between the locks or waiting for loads. Generally out came the brushes and paints. Then with the skills passed down the generations a water can or barrel was transformed into a work of art.

The phrases “an Englishman’s home is his castle.” And the more feminine “roses round the door.” Then perhaps I suppose the emotions of pride and romance are underpinned?

Grace to this Space…

A dreamy landscape featuring a fairy tale castle by an idyllic bridge over a stream. It seems like self pride was a major driving factor and modern history certainly appreciates what has become this most recognized of ‘folk art.’

Some boats did have a small fore-cabin for the children. Also with motor boats being introduced the boats increasingly worked in pairs. The motor boat towing the un-powered boat or “butty.” This naturally gave the family a pair of rear cabins. Though very small, they were each just about seven feet wide and around eight feet in length.

Almost everything was given the roses treatment to brighten up the cabin. The womenfolk also managed to keep everything clean and shiny. An abundance of lace and brass were marks of status and pride. Although for the most part only seen by other boat people.

While far from being frowned upon nowadays the people of this lost heritage are regarded as heroes of the industrial revolution! They certainly have my respect!

The End of the Beginning…

“public enthusiasm for their story and heritage keeps the canal folk art alive.”

Freight traffic on the canals continued to decline through the early 20th century. By 1948 the waterways were mostly owned by the railway companies. With railway nationalisation canal ownership became public too. Eventually operated by ‘British Waterways,’ competition from road haulage hastened the demise. The final contract of any real length was for jam transport to London in 1970. The boatmen and their families were consequently forced onto the land. Fortunately public enthusiasm for their story and heritage keeps the canal art of “roses and castles” alive.

“seriously neglected the infrastructure was remaining.”

Meanwhile as early as the 1945 came the formation of the “Inland Waterways Association.” Volunteers and campaigners worked tirelessly to keep the network open to navigation. Fortunately the canals were created with acts of parliament. So while seriously neglected the infrastructure was remaining in place. Therefore through the efforts of countless volunteers restoration was possible.

As a result of volunteers determination we have this incredible asset today. Because of their efforts the network will continue to be enjoyed for canal holidays and cruisers for many years to come. Boat builders are busier than ever building new narrowboats. The canals have more people living on them now than at any time in their history.

Canals are also a haven for anglers and ornithologists. Most noteworthy are the varied habitats for wildlife. Generally seen as corridors of nature throughout Great Britain. In 2012 ownership of the network passed from ‘British Waterways’ to ‘The Canal and River Trust.’ Finally and fortunately the trust does seem to have a more positive view of the future.